Jan 23 Posted by EyeMark in January 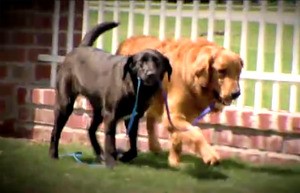 Blind since birth and suffering from severe and frequent epileptic seizures, Golden Retriever Tanner was left without a home when his beloved owner passed away. Unfortunately, because of the difficulty in managing his seizures and the need for round-the-clock care, a new home could not be found for him. He was placed in the care of an experienced vet at an animal hospital. At the same hospital, a black Labrador, Blair, was recovering from a gunshot. Although she had healed well physically, emotionally she was in a constant state of fear and anxiety.

One day, as both dogs were out in the play yard together, Blair seemed to sense that Tanner needed help. She took Tanner’s leash in her mouth and led him around the yard, and this was the start of a strong healing bond for both dogs.

The friendship has changed both Blair’s and Tanner’s lives for the better, each providing a sense of comfort for the other. Once without home or hope, the pair is now inseparable. Blair, once a nervous and timid victim of post-traumatic stress disorder, is now calmer and less apprehensive around others. And Tanner, once so incapacitated by seizures that left him completely panic-stricken, has improved by leaps and bounds as his seizures have reduced in frequency and severity.

“We’ve worked with a lot of different service dogs to provide these services for people,” a hospital spokesperson said. “But it’s the first time I’ve seen anything like this, the special relationship these two dogs have.”